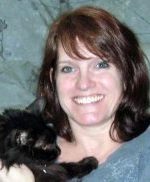 Vanessa was the second of a set of identical twins born to Preston and Rose Conley.

She spent her childhood years in the San Fernando Valley, CA enjoying Girl Scouting, sewing, art, dance, camping and going to the beach.  She loved to travel. She graduated from Reseda High School with the class of 1984 and went on to attend CSU Northridge, pursuing a degree in graphic art and commercial design.

After graduating from college in 1989 Vanessa worked for a time coloring cells at the animation studios. Later, she would attend UCLA, earning a certificate in paralegal studies. She loved the law and worked for many years as a legal secretary. Vanessa followed a job to Portland in 2006 and fell in love with the city; she treasured her quaint home, and time spent having a pint with friends. In recent years she worked at the Stadium Fred Meyer store.

Vanessa was a lifetime animal lover, especially cats. She enjoyed Rod Stewart and the classic rock of the 1970s, as well as the New Wave music of the 1980s. During the many years she lived in Reseda, she often looked forward to her evening commute- she found beauty in the light and shadows of twilight in The Valley, which made that a favorite time of day. She was never far from a piece of chocolate, and liked reading a good book.

Vanessa is survived by her mother, Rose Conley, her sister, Melinda Conley, companion, Steve, several work colleagues and friends. She was predeceased by her father, Preston Conley in 1987.

The family would like to thank the medical teams and caregivers of the Legacy Hospitals for their compassionate care of Vanessa in her final days.

At her request, no services are planned. Donations in Vanessa’s memory are suggested to Multnomah County Animal Services, from which she adopted her beloved cat, Ben, or to an animal rescue group of your choice.

Help tell the story of Vanessa by contributing to the Life Event Timeline. Upload the photo of an event...

Be the first to share a memory of Vanessa.