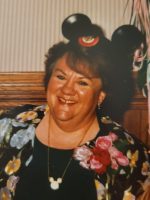 On April 10th Terri passed away in Vancouver Washington although she lived her first 72 years in Portland Oregon. Terri was the first child of Albert and Stella Rich who have preceded her in death.

Terri was born on July 14th 1948 and grew up in the Brooklyn neighborhood of south east Portland. She attended Sacred Heart grade school and in 1969 graduated from Marycrest High School 1966. After high school she started her career of public service at the Department of Veterans Affairs, she also had jobs at the former University hospital now OHSU and at Portland State University in the Administration of Justice Department, however Terri spent most of her working career as a dispatcher for the Bureau of Emergency Services in Portland where she received Letters of Commendation recognizing her outstanding work and commitment to the community. She retired from the bureau in 1998 after 19 years.

Terri will be remembered for her great love and devotion to her family and friends, her dog Tucker and her love for all things Disney.

A funeral mass for Terri will be held at Sacred Heart Catholic Church 3910 S.E. 11th Avenue Portland Oregon 97202 on Saturday April 30th at 10:30 am. This will be followed by a reception in the parish hall.

Donations can be made in her name to Legacy Hospice.

Help tell the story of Terri by contributing to the Life Event Timeline. Upload the photo of an event...

Be the first to share a memory of Terri.