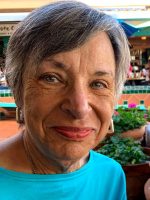 Susan (Susie) Wolff Desmond passed away on April 11, 2022.  Susie was born in Aberdeen, Washington, in 1943.  After graduating from the University of Washington in 1965, she obtained a master’s  degree in Special Education from Boston University.  While in Boston she married Milton Lavin, and they had their first child, Joel.  In 1976 they moved to Pasadena, California where their daughter Emilie was born.  Susie and Milton’s marriage ended in divorce.

Susie moved to Portland where she renewed her friendship with her high school boyfriend Tom Desmond.  They were married in 1994.  As retirees, Susie and Tom traveled to Europe, Africa and South America.  One of the highlights of their international travels was their trip to Israel and Jordan.  They also visited Hawaii annually where they enjoyed many happy times.

Susie had a lifelong career in education serving children as a special educator, an English  teacher, and a middle school dean. After she retired, she continued her career in education as a substitute teacher.  Susie loved theatre and served on the board of directors of the Portland Center Stage.  She volunteered at the theater for many years, guiding tours through their remodeled Armory.  Susie lived in Portland’s Pearl District where her miniature Schnauzers were a neighborhood fixture.  Susie was proud of her family’s Jewish heritage, and she passionately expressed her opinion on many subjects.  She was a lifelong Democrat and one of her proudest moments was shaking Barack Obama’s hand at the Portland Convention Center.  She had an infectious smile, eyes that sparkled, and a laugh that was contagious, especially when conversing or persuading any listener about one of her favorite causes.

Susie was diagnosed with Vascular Dementia in 2017.  In June of 2020 she moved to memory care. She is survived in Oregon by her husband Thomas Desmond; her son Joel Lavin (Anna Spickerman); her daughter Emilie Bennett (Andre Bennett); her grandchildren, Lila and Solomon Lavin, and Nina and Ava Bennett; and her brother George Wolff, DDS (Karen Wolff) who live in California.

A Celebration of Susie’s Life will be held at Congregation Beth Israel at 1972 NW Flanders Street in Portland on May 6 at 11:00 AM to be followed by a reception.

Charities of choice are the Alzheimer’s Association or Maple Creek Miniature Schnauzer Rescue in the name of Susan W. Desmond.

A Celebration of Susie’s Life will be held at Congregation Beth Israel at 1972 NW Flanders Street in Portland on May 6 at 11:00 AM to be followed by a reception

Help tell the story of Susie by contributing to the Life Event Timeline. Upload the photo of an event...

A mother never forgets those who offer support and acceptance of their child. This is what Susie meant to our family - support and friendship. From our first meeting at Chehalem Elementary, she became an advocate for our son. Time went on, we stayed in contact and the events we shared together always were teaching moments - the art of living life. How precious are our memories of this wonderful lady. We were honored to be in attendance Friday. We pray for comfort for Tom, Joel and Emilie and family.

My treasured time with Susie was during the early pandemic when she needed companionship and a bit of direction. It was not easy to find the need behind her bright presence, ready conversation, quick recall, enthusiasm and big laugh. I found her hook in dropping a Yiddish word in the conversation, often unsure if I was using it correctly, and if not, she was sure to put it in context. Only in hearing of her full life can I measure how much was impacted by dementia, Susie remained curious and elegant, lipstick and all. To Susie, Tom and family ~ Yehi zicha baruch.