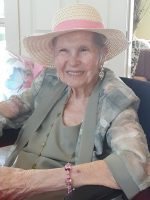 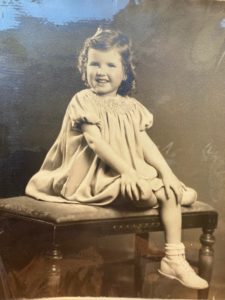 Sally was born in Santa Barbara, California and grew up in Berkeley, where she attended high school. She earned a bachelor’s degree and a master’s degree in social work with an emphasis on early childhood development from the University of California at Berkeley. Early in her career, she worked at Agnews State Mental Hospital in Santa Clara and at an early childhood development program in San Diego. She had a private therapy practice in Corvallis, Oregon in the 1970s.

Sally sustained many close friendships throughout her lifetime, including one dating back to her time at Berkeley. After moving to Corvallis, she was active in the women’s rights movement. She marched with her children in support of the Equal Rights Amendment and was a founding member of a local feminist support group with nine other women. An early devotee to healthy eating, Sally volunteered at the First Alternative Natural Foods Co-op in Corvallis. She liked to pick locally grown fruit and made wonderful meals that often featured creative green salads for her family.

Sally nurtured a love of reading in her three children. When they were young, she was often willing to drop whatever she was doing to read to them. She belonged to the same book club for more than 25 years and remained an avid reader until the day she died.

Sally was curious, empathetic, and intuitive. She was a kind and caring listener and encouraged people to think deeply about their own and other’s feelings. She loved swimming, eating lobster with butter, walking on the beach, doing tai chi, and caring for and playing with her four grandchildren.

While living in Portland in the second half of her life, Sally joined a sangha and embraced the Zen Buddhist teachings of Pema Chodron and Thich Nhat Hahn, whom she often quoted. In recent years, she shared the sentiments expressed in the following quote (based on the Buddha’s Five Remembrances) with her family, friends, and sometimes even people she had just met.

She is survived by her three children, Julie Corliss of Silver Spring, Maryland; Liana Corliss of Portland, Oregon; and Donovan Corliss, of San Francisco, California (from her marriage to Jack Corliss, her former husband) and their families.

A memorial service will be held at a date yet to be determined. To honor Sally, please consider a donation to SMART Reading.

Help tell the story of Sally by contributing to the Life Event Timeline. Upload the photo of an event...

I am so grateful to have had Sally's friendship for almost 20 years. I appreciated her warmth and cheerfulness and am so thankful that she got me started with sangha. May her family find comfort in those many years of memories.

Sally, we will miss your smile. You had a way of lighting up the room and making even the worst days brighter! Thank you for giving us the honor of getting to know you! Senior Haven will forever remember!

I am a friend of Sally's from the Buddhist community here in Portland, Oregon We had a friendship in our Sangha activities and out of those. I loved her humor, honesty, assertiveness, deep thinking and an adventurousness in her life. She inspired me to be authentic, kind and to work on that middle path of an honest and calm view of where life takes us. So special to have in my life for a long time. I send love to her family and friends. Claudia

What beautiful gifts she shared with her family, friends, community and our planet. We are all better for knowing her gentle and radiant spirit. Condolences to her beautiful family and may she walk in light.

This light will live on, shine upon us and guide our path.