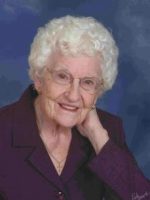 Ruth Mary Reberger passed away on January 4, 2023, with family by her side.

Born February 4, 1926, Ruth was the first of eight children born to Thomas and Wilhelmina Redmond. Born and raised in Oshkosh, Wisconsin, Ruth graduated from Oshkosh High School in 1944. She attended Oshkosh Business College and afterwards landed a job at Wisconsin Axel, where she worked as a copy machine operator, typist, and then received a promotion to secretary.

At the young age of 23 Ruth moved to Portland, Oregon where she lived with her Aunt and Uncle, Margaret and Warden Nelson. Soon after her arrival Ruth’s cousin, Buster, introduced her to Ralph Reberger, Jr. After what Ruth described as a wonderful nine month courtship, Ralph proposed, and they were married at St. Ignatius Catholic Church on January 14, 1950. They were married for 51 years.

Ruth and Ralph made their first home in North Portland. Their first child, Janet Marie, was born in December 1950 and Daniel William was born one year later on Janet’s first birthday. Several years later Nancy Ellen (1955) and Diane Mary (1957) were welcomed into the family. Ralph built a beautiful home in Northeast Portland where they lived and raised their family. Good neighbors were plentiful and quickly turned to friends that felt more like family. Ruth and Ralph were devoted to each other and created a life around their children that included family camping trips, water skiing on the Columbia River, gatherings with lifelong friends and neighbors, memorable holidays, and other joyous occasions and celebrations.

For many years Ruth worked at Portland Linotyping Co., owned by dear friends Ray and Doris Sneddon. She held various positions and ended her career there as office manager. Ruth thoroughly enjoyed her work and co-workers.

In retirement Ruth spent lots of time with grandchildren, traveled, belonged to a birthday lunch club and bunco group, tended to Ralph’s large vegetable garden, and attended daily Mass at St. Rita Catholic Church where she was a long time, devoted parishioner. She volunteered for 20 years at the St. Vincent de Paul food pantry at St. Rita’s. She was passionate about this service and enjoyed helping in any way she could, often going above and beyond. She delivered weekly food baskets, kept the books, and coordinated utility, rent, and other payments for those in need.  Along with other volunteers, Ruth did her best to provide assistance to everyone who asked.

Ruth was a wonderful woman who cared deeply for her family, friends, and church community. She was loved by many and will be forever missed.

In lieu of flowers, a donation can be made in memory of Ruth Reberger to St. Vincent de Paul, St. Rita, stritapdx.org.

Help tell the story of Ruth by contributing to the Life Event Timeline. Upload the photo of an event...

Be the first to share a memory of Ruth .