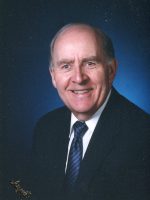 Dick was born on January 11, 1933 to Maxwell and Lila Sturgis in Portland, Oregon. The family relocated to Tigard, Oregon in 1944 where Dick attended Tigard Elementary and Tigard High School, and graduated in 1950. He went on to work for the Oregonian and the United States Navy until 1954. It was after his return home, that a friend invited him to Hinson Memorial Baptist Church, where he met his two great loves: his Lord and Savior, Jesus Christ, and his future wife, Frances Johnson. Dick and Fran were married in 1956, after which they moved to Eugene, Oregon where Dick began architecture studies at the University of Oregon. They added a daughter to their family in 1960, and a son in 1961 shortly after Dick’s graduation.

They moved back to Portland where Dick worked for David R. Harkness, Architect. In 1965, one more son joined the family. Dick went on to a career in architecture and served for a number of years first at Georgia Pacific, and then Tektronix.

Dick has led a full life of devotion in loving service to his Lord, family, and friends, and still fulfilled his passions for saxophone, travel, golf, creating, and his beloved Ducks.

Help tell the story of Richard by contributing to the Life Event Timeline. Upload the photo of an event...

Be the first to share a memory of Richard.