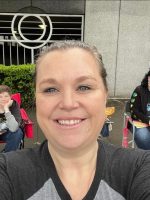 Rebecca Gail Williams Random passed away in her home in Portland on July 13, 2022.

She was born September 5, 1977 to Paul and Deborah Williams in Layton, Utah. She was the second oldest of five siblings. She attended school in Layton, Utah and later in Roy, Utah. She was an intelligent person that could understand the most complex ideas and thoughts even at a young age. As her siblings, we were often compared to her and asked “Are you as smart as your sister?” But she never made anyone feel less smart. She was involved in debate and could debate any side of any topic.

After graduating high school, she attended Salt Lake Community College. She then transferred to University of Utah where she earned a Bachelor’s degree in Philosophy. She then achieved a life long dream of being accepted into law school at SJ Quinney College of Law at University of Utah. She earned a Juris Doctorate in 2006. Ultimately, she would continue to pass the bar exam in not only Utah, but also Michigan (2010) and Oregon (2012).

While attending U of U, she met Cain Random. They bonded over discussions of philosophy and he always challenged her to do great things. They were married in 2003. And in 2006 they welcomed their first child into the world, Astro and in 2008 Gideon was born and completed the Random family.

As a family of four, they lived in both Michigan and later in Portland. She worked for different law firms and  eventually settled in as a Senior Project Manager at Epiq. She and Cain later divorced, but remained great friends and co-parents to their children.

Family was the most important thing to Rebecca. To be loved by Becky was a great honor.

She was fiercely loyal and a protector of anyone she loved. She adored her babies beyond anything believable. She was a shining example of motherhood. The patience and unconditional love she has was undeniable. 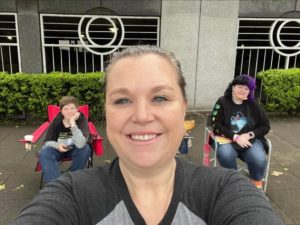 Her siblings meant the world to her. Through all the ups and downs, they were always there for each other and were uplifted when the others needed extra strength. It is because of this unconditional love and example of strength that we feel lucky to have even had Becky in our lives and will forever be grateful for these values she taught us.

Becky had a love and zest for life that is envious to anyone who met her. She was always up for any adventure, usually we had to get a Pepsi or Starbucks first though. She was brilliant and magical. Just being in Becky’s presence, you not only wanted to be her friend, but she made you feel like you were best friends already.

She loved to dance, sing karaoke, “crack a case” with True Crime and was a huge fan of reality TV, with Survivor being her favorite. She loved the Dallas Cowboys and the Portland Trailblazers. Becky loved ALL music. She loved playing games and doing jigsaw puzzles. And spent way too much time playing Candy Crush.

Rebecca is survived by her children: Gideon is her son and Astro is her moon; her ex-husband and best friend: Cain; her siblings: Melanie (Adrian), Lindsay (Michael) and Kyle; her nieces and nephews: Alex, Zak, Mason, Cariad, Loni, Telesia, Ezra, Aeris, and Zeke; her stepmom: Shauna; her step siblings: Brandon (Stacie), Dustin (JaLane), Cameron (Cheree), Amanda (Chris) and Summer; numerous aunts, uncles and cousins; and so many friends that loved her.

She was preceded in death by her mom, Deborah; her sister Katie; and her dad Paul.

Funeral services will be held in Portland at Holman’s Funeral Home (2610 SE Hawthorne Blvd, Portland, OR) on Wednesday July 20, 2022 at 3pm. There will be a funeral held in Utah at a date to later be determined.

Help tell the story of Rebecca by contributing to the Life Event Timeline. Upload the photo of an event...

We love you so much Becky! I will never ever forget the good times when we all started hanging out and became family. I will forever miss you my beautiful friend 💕😇

The first day we met on New Years in 2016.. you never changed. Just amazing woman, smart, kind and the love for your family and kids I admired. I always said I wish bonds with my siblings like you! You then became my big sister I never had! Thank you for everything, the talks, legal advice being my shoulder to cry on when I told you about my mom. I love you girl! You’ll always be in my heart and I will never forget you! 💙💙

First, condolences to the Williams and Random family. I met Becky through a mutual friend and she instantly became a part of my very small circle. So kind and giving and easy going. I could never step into her home and not be forced to have a white Russian. I was so happy to have a friend that was an attorney. I would say, "my friend practiced law" and then call Becky to get legal advice. I was proud of her accomplishments. Here I am a lil black girl from the hood having drinks and good times with my white lawyer friend. Lol I use to say, "I always wanted a white friend Becky" and she would say something goofy in return and then we'd laugh and I'd say, "You know you my favorite white girl" lol she never took my words as anything other than love. Becky you will definitely be missed my dear. It's hard to believe you're gone. I hope you know that you were loved by many and losing you is a hard pill for us all to digest. God has you now and I know you're looking down and seeing the many lives you've impacted. Rest easy Becky with the good hair. Blessings to all friends and family.