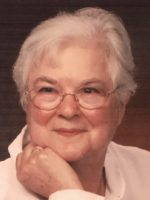 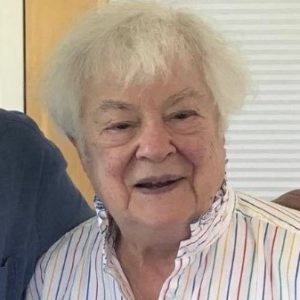 Sydney suffered a major stroke Wednesday night – Thursday morning, 11/3 – 11/4/2021, at her independent living apartment at Rose Villa in Oak Grove, Oregon. She was transported to OHSU Hospital where she died peacefully on Friday, November 5, 2021 at 8:24 pm, surrounded by her family. She will be buried at Willamette National Cemetery in Portland, Oregon alongside her husband, Edward, who died in 1987. There will be no service at this time but a memorial service will be held, date to be determined.

At an early age Sydney moved with her family to the Boston area where she spent her early school years. She was an only child.

Sydney attended high school in Portland, Maine, where her family lived for several years. She was exceptionally bright and when transferring to other schools was twice placed ahead a grade and thus graduated from high school at age 16, in Stratford, Connecticut where her family then lived.

During high school during World War II Sydney worked in several defense factories in Stratford and Bridgeport, Connecticut, including Coastal Manufacturing. She just recently learned what she had been working on at Coastal, the VT Fuze for detonation of a bomb. It was one of the most secret programs of WWII. She described it as “soldering about 18,000 wires together for each part which would then be tested by lifting it to ensure the wires held.”

Sydney was an avid equestrian, archer and sea scout in her teen years. She did not allow a faulty heart valve to hinder her activities to the consternation of her mother, Celia. With the disapproval of her father she attended USO dances to meet sailors.

At age 16 (although she looked several years older) in 1944, she entered the University of Connecticut in Storrs, CT. Her freshman year she took engineering courses. The next year she switched to social science.

One day a young man noticed her in class and asked a friend to introduce them, as was the custom of those times. Sydney was an exceptionally beautiful young woman as many photos can attest to. Thus began the lifelong love between Edward Herbert and Sydney Torgan. Finding out that Edward played on the football team she told him she wasn’t sure if she wanted to date a football player. He responded he wouldn’t have asked her out if she did (want to date football players.)

She loved to repeat the story of their growing love. When she asked if he could wait longer while she got ready to go out, he said, “I’ll wait forever for you.”

Edward asked Alton for permission to marry Sydney and was denied. Sydney loved to tell the story: My father asked Edward if he had a job. Edward “no”. Do you have any future plans? Edward “no”. How are you going to support my daughter? “I don’t know”. So Edward and Sydney eloped to New Hampshire where under 18 did not require parental permission to marry. Little did Alton know that Edward would go on to become a world-renowned biochemist.

After graduation the couple moved to Philadelphia, Pennsylvania where Edward earned his Ph.D in biochemistry. In 1952 their only child, Edward Aaron, was born. Sydney attended Temple University in Philadelphia working on a Ph.D. in psychology but dropped out to have a baby. She worked at Gimbals Department Store to support the family.

In 1953 the family moved to Madison, Wisconsin, where Edward was a post doc at the University of Wisconsin and Sydney a full time homemaker.

By 1955 the family moved to Arlington, Massachusetts, where Edward was an assistant professor at MIT in nearby Cambridge. Sydney worked nights for a short while at a diner as a waitress. The scene was right out of “Happy Days” with car hops, juke boxes, and teens in leather jackets.

Sydney was born to Jewish parents. Her father was raised an Orthodox Jew but her mother was an atheist. Sydney was therefore not raised in a religious home although they strongly identified as ethnic Jews. Starting about age 12, Sydney sometimes attended church with Christian friends. This led her to eventually become a Christian in the Episcopal Church. However, she always considered herself Jewish and believed her Christian faith to be the fulfillment of the Jewish religion.

In 1962 Sydney enrolled in the Masters of Social Work (MSW) program at Boston University. A year later the family moved to Eugene, Oregon, where Edward had accepted a position as a Professor of Chemistry at the University of Oregon. She would complete her MSW at the University of Washington in 1965.

Sydney worked as a social worker for the Eugene Public Schools and then as a counselor with the University of Oregon Department of Psychology.

In the late 60’s Sydney opened her home to teenage foster children. One teen with drug issues turned his life around because of her love and care. He went on to become a minister and Greek scholar (for bible translation) and has visited her from Canada every year since.

In 1970-71, while her husband was a visiting professor at Harvard Medical School, she completed an internship at Boston State Mental Hospital gaining certification as a drug addiction counselor. Upon returning to Eugene, in 1971, she worked for many years in drug counseling.

In the mid 1970’s, Sydney’s interests turned to environmental activism. She was a volunteer lobbyist for the Audubon Society and other environmental groups for many years, and testified at many Oregon Legislative hearings. Her focus was on preserving old growth forest. Her last environmental work was with the Oregon Shores Coalition on their Board, for which she made many trips to Newport, well into her 80’s.

Eager to fully engage in her activism she mastered using a computer in her 70’s to send and receive legal documents. In her 80’s she got her first iPhone. In her 90’s she was a regular on Facebook.

In 1983 Sydney became a grandmother for the first time. She became known as “Grandma Glasses” for the remainder of her life when granddaughter Sarah, age one, pointed at her in her glasses and announced “gasses”.

Sydney was an excellent cook and found joy in preparing wonderful meals for family and friends, usually made from scratch. You were fortunate if you ever had the experience of a Thanksgiving or Christmas dinner at her home.

Sydney was an avid gardener in later life. She transformed the yard of her home on Dosch Road in Portland into a certified habitat. She maintained a vegetable plot at the nearby community garden into her late 80’s. She refused any help with weeding her plot. The back of her car was always filled with gardening tools, pots, gloves and plenty of dirt on the floor.

Sydney’s husband died in 1987. She lived life alone, on her own terms, after that. She traveled the world, including England, Europe, Hawaii and the Middle East, all multiple times. She spent six months in Israel as a volunteer in their civilian service corps, in uniform alongside the army. She once hiked all through Northern England, staying in British pubs along the way.

Sydney enjoyed lengthy intellectual discussions, especially regarding politics and current affairs. It was tough to win an argument with her because she always had her facts straight. An avid reader, she devoured 100’s of books. She had seven full bookcases in her apartment most recently. She was never without reading material wherever she went, including visiting family. The minute you left the room she would return to her beloved Wall Street Journal.

As Sydney gained her computer skills she began the study of genealogy, in the early 2000’s. She established two family websites on myfamily.com, going on to establish the genealogy of her family back several generations. In the process she discovered several “lost” branches of the family and brought many people together from around North America, Europe and Russia. Last summer a cousin from Washington DC area visited her at Rose Villa, having been “discovered” through her research.

Help tell the story of Phyllis by contributing to the Life Event Timeline. Upload the photo of an event...