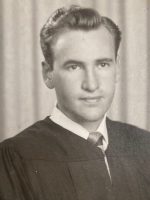 Norman Wapnick, a long-time resident of Portland and friend to many in the community, passed away on April 23, 2022 from natural causes after 90 years of a life well lived. Norman was born and raised in Brooklyn, New York to Charles and Eva Wapnick, who were first-generation immigrants from Eastern Europe. Norman enriched his life and the lives of many others by focusing without compromise on family, leadership, and community service.

Above all else, Norman valued his family and the love shared within it. With his wife of 70 years, Suzan, Norman’s family grew to include three daughters and sons-in-law, six grandchildren, and one great grandson. He unceasingly shared his love, interest, guidance, and support with his family.

After completing his undergraduate education at Brooklyn College and his law degree at Columbia University, Norman arrived in Portland in 1956 for active duty with the U.S. Coast Guard. Following three years of service, Norman returned to the East Coast, where he and Suzan began raising their new family. In 1960, the growing Wapnick family returned to Portland and laid down permanent roots.

In Portland, Norman began a forty-year career in commercial law as an initial partner, and later as the senior and managing partner, in the Sussman Shank law firm. His overriding philosophy in business and life was to create results in which all parties benefitted from respectful and fair treatment. He also championed professional development and promotion of women as full partners within the firm.

Throughout his life, Norman stayed involved as a leader in many organizations, serving as Treasurer and President of Congregation Neveh Shalom, an active member of the Commercial Law League and leader of many legal committees, as well as an officer in the U.S. Coast Guard. In his 45 years of active and reserve duty, he rose to the rank of Captain, leading the Coast Guard Reserve at the Swan Island base.

Norman maintained an insatiable interest in worldwide travel, which he shared with Suzan, his extended family, and friends. He enjoyed experiencing new cultures and shared many adventures. Norm and Sue’s travels also included special trips, which were cherished by each grandchild.

Known to his family as Papa, Norman always demonstrated to them a love of life, the meaning of generosity, and the value of people and their traditions. Norman is greatly missed by his wife and true love, Suzan; children Karen Salzberg (Joel), Cindy Buker (Paul), and Janice Shainsky (Mike); adoring grandchildren, Jen, Beth, Sam, Zack, Steven, and Charlie; and great-grandson, Silas; his sister, Kay Kien (Julian), of Palm Beach Gardens, Florida, and numerous nieces and nephews.

Norman always valued making the world a better place. If you wish to make a donation in Norman’s memory, please consider any of the charitable organizations that he contributed to during his life, including Congregation Neveh Shalom in Portland, the Jewish Federation of Greater Portland, or a charity of your choice.

Help tell the story of Norman by contributing to the Life Event Timeline. Upload the photo of an event...

Norm was both a mentor and an inspiration to me as both a young, and not so young lawyer. I will never forget his advice and kindness.

Norm was a mentor and friend to many of us in the law community. Always a gentleman. A life well lived.