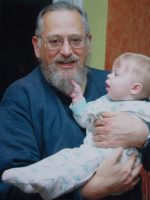 Martin was born to Eugene and Estelle Faveluke in Portland. He was often truant in grade school, riding his bicycle to spend time more productively playing on the B17 bomber at Art Lacey’s gas station in Milwaukie. He went to Cleveland High School and played French horn in Portland Junior Symphony.

Martin diligently studied used car salesmanship and ski team management for three years at Reed College. After being told it would take another two years to graduate, he switched to Lewis and Clark and got a degree in economics in one year. He enlisted in the Army, shoveled snow in Boston, learned to fly, and was then stationed in the Phillipines where he worked as an cryptanalyst and got a grand tour of Asia. He came home, earned his J.D. from Lewis and Clark and passed the Oregon Bar.

Martin found himself employed as a bookkeeper for his parents’ business before he could read and he never retired. He was a lead soldier manufacturer, survey crew assistant, steam press operator, tailor, cryptanalyst, photographer, English teacher, car salesman, airshow and charter pilot and flight instructor, attorney, judge, bicycle repairman, garbage truck driver, water system operator, lobbyist, financier, landlord, business manager, father, grandfather, and friend. He put his heart into everything he did and tried to help everybody he could along the way.

Help tell the story of Martin by contributing to the Life Event Timeline. Upload the photo of an event...

Be the first to share a memory of Martin.