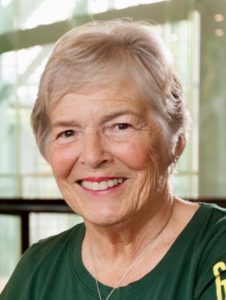 A twinkle in her eye, a smile on her face. Witty, kind, warm, gracious and sincere. A force with an impact on others. So graceful with true beauty inside and out. Quiet dignity. Such a friend, such a special person. These were a few of the words recently used to describe Marilyn.

Marilyn was born in Portland on August 7th, 1940 to William and Catherine Yung and was raised in NE Portland as the second of seven children. Growing up with so many siblings in a house with one bathroom, Marilyn developed both her sense of humor and her nurturing, loving character we all admired. She attended St Rose School and graduated from Holy Child Academy in 1958.

A 61-year love affair began in 1959 when Marilyn met Gerry. She worked at Fairley’s Pharmacy, and he worked at US Bank’s Sandy Boulevard branch across the street. He caught her eye – or did she catch his? It depends on who told the story – and what started as a friendship grew to a marriage proposal on Christmas Eve in 1960 and a wedding in 1961.

Married at 20 and a new mother at 22, family was always Marilyn’s priority. Money was tight, and meals were…creative. But she set up a happy home. She was an excellent seamstress and made many of her and her children’s clothes. Marilyn worked outside of the home on and off while the children grew, prioritizing a healthy family unit above all. She was an amazing mom.

Always eager to get involved, Marilyn served in many capacities at her children’s schools over the years, organizing events, running interference for her son, volunteering as chaperone, and serving as PTA president. All the while, she quietly and elegantly supported Gerry and allowed him to focus on his demanding career.  Never one to turn down a card game, Marilyn would fire up a game of Rummy or Crazy Eights at the drop of a hat. She was also an excellent bridge player, and she always looked forward to her bridge nights with friends. She was very proud of the masterpoint she was awarded for her play.

Marilyn loved to travel, and she always said yes to the opportunity, whether to visit her children and grandchildren, experience new places, or reconnect with family.  Mostly after Gerry’s retirement, they traveled the world. At Christmas the grandkids would receive a carved figure from Africa, a T-shirt from the Olympics or a mini rugby ball from Australia and a retelling the adventures they had experienced – meeting the Queen of England in Buckingham Palace was a story that was hard to beat. While they continued to live in the Pacific Northwest, Marilyn and Gerry escaped to warmer climates in the winter months, first to the California desert and later to Maui. The Maui sunsets, in particular, gave them much happiness and were a daily event worthy of a cocktail and a blow of the conch shell.

Feeling blessed with all they had, Marilyn and Gerry turned to philanthropy in their later years. The ability to help others was fulfilling for them, and the delightful sparkle in her eye and contagious smile showed her joyfulness.

Though she came from humble beginnings, Marilyn never lost sight of her good fortune. She was the apple of Gerry’s eye, and he was hers, throughout life’s highs and lows. They were proud of their children and button-popping proud of their grandsons. Gerry preceded her in death, as did her sister Carol (Yung) Frost and her brother John Yung. She is survived by her daughter Sue (Dave) McDonald and son Paul (Megan) Cameron; her adored grandsons – Kellen, Ross, Colin and Luke; her siblings Bill Yung, Steve (Doranna) Yung, Paula Everist, and Jerry (Debi) Yung; and many nieces, nephews and extended family.

A celebration of Marilyn’s life will be held on October 8th; please contact the family for details. In lieu of flowers, the family suggests contributions in Marilyn’s memory to the Michael J Fox Foundation for Parkinson’s Research, the Doernbecher Children’s Hospital Foundation, or a food bank/pantry of your choice.

Marilyn/Mom/Nana/Sis/Meenan/Mo/Mrs. C – you will be dearly missed, but your love will always be in our hearts. Ooo-ahh!

Help tell the story of Marilyn by contributing to the Life Event Timeline. Upload the photo of an event...

Clark County Food Bank was a beneficiary of the beautiful life of Marilyn Cameron. With her husband Gerry, the Camerons were generous and caring, wanting to make sure that the people in our community were taken care of and helped. We appreciate the beautiful tribute that was written here and have good memory of Marilyn’s graceful and true beauty, the delightful sense of humor, and the sparkle and joy she brought to every situation. Many thousands of people in our community were helped and served because of Marilyn’s desire to give. The hungry have been fed, and this life is the reason why. You will be missed, but your legacy lives!

My favorite memories of Aunt Marilyn and Uncle Gerry was when they would take me out for our birthdays. It was so sweet of them but because Gerry and I shared birthdays it was extra special.

One of many lovely memories I have of Marilyn was the occasion of her 40th birthday. Mr C, as I called him, had put extremely large lawn signs in the neighbors yards so any drivers approaching the house could read the message GUESS WHO’S FORTY! With a prominent arrow pointing to the Cameron home. Marilyn was slightly embarrassed but pleased as well with the attention and good wishes she received from all. It was a beautiful and fun party that I was lucky to attend as a friend of her daughter Susan. I can still see Marilyn’s face at the unexpected arrival of a dear old friend she hadn’t seen in ages. She will be missed by everyone who knew her. Much love to all her family.