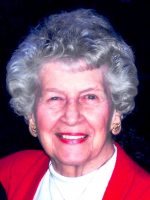 Margaret Mary Doell, wife, mother, and grandmother died peacefully at home surrounded by her husband and children on December 14, 2015. It is with a mixture of sadness, memories, love, and gratitude that her family and friends say goodbye.
She lived a long and beautiful life.

Margaret Mary Lash was born on September 18, 1914 to Michael and Mary Lash in Rock Springs, Wyoming. She was the third of five children, two older brothers; John and Andrew; and two younger sisters, Johanna and Helen. She was the last surviving sibling.

She grew up in Rock Springs until she was eight years old when her family moved to the Rose City neighborhood in Portland, Oregon where she attended St. Rose grade school. Her family moved to the St. Johns neighborhood when she was ten years old. There she attended and graduated from Assumption grade school and went on to graduate from Girls Polytechnic High School in Portland.

After graduating from high school she worked first for J.J. Newberry as a salesperson and then for Mitchell’s Dress Shop as an apprentice dressmaker in downtown Portland. In 1940 she joined her father’s business, Lash’s Food Market in St. Johns where she did the accounting and bookkeeping until 1942.

In 1943 she went to work for Kraft Foods Company in Portland where she worked until 1950 as the secretary to the general manager. She was also the U.S. Savings Bond Officer for Kraft Foods Co.
In 1948 she married Edward John Doell. She and her husband had three children, Steve, born in 1950, Barbara in 1952, and Debora in 1959. She had two grandchildren, Scott, born in 1974 and Lisa born in 1980.
Margaret was preceded in death by Lisa in 1992.

Margaret was a stay at home mom and raised her three children with love and discipline as her husband Edward’s job required a great amount of time traveling. She had to be both mother and father much of the time which she accomplished with grace, hard work, authority, and humor.

She made sure her children had breakfast every morning before school, a lunch packed for the school day and dinner at the same time every evening. She also saw to it that her children’s homework was done and turned in on time. In the summertime she kept her children busy with projects, fun outings, and vacations. She was a very good mother and CEO of the household.

Along with all of her responsibilities to her children and husband remarkably she found time to volunteer her many talents to organizations important to her. Whether it was the Parent Teachers Association at school, being a “room mother” at her children’s grade school, the church Altar Guild, or the annual Christmas Bazaar at her church, she was always very involved.

She was an organizer. Her take charge manner, such as when building the new church in her parish, earned her the title of “little general” from her peers. She was self-motivated, always finding a project that needed attention and getting it done.

She also was a humanitarian, always coming to the aid of people who were sick or in need in her church or the neighborhood.

As a young woman she was a snow skier and climbed to the summit of Mt. Hood. She was also an aspiring thespian, belonging to a drama club and appearing in several plays at local venues. After her children started attending school, she belonged to Bunco, Pinochle Clubs and a bowling league for many years. She also enjoyed playing card games and board games with family and friends.

She was a sports fan and very rarely missed watching her Portland Trailblazers on television. She also did the crossword puzzle almost every day.

After her children left home, in addition to her volunteer work which she continued, she spent time traveling with her husband to conventions and meetings for his job and vacations for fun and leisure.
In retirement Margaret and Ed continued to travel and spend time with their family and their good friends.

In her later years she had slowed greatly due to osteoarthritis and advancing age. However, she was still alert, had a twinkle in her eye and a smile to greet people.

She and her husband were married for sixty-seven years and still lived in the home they built in 1950.

Margaret celebrated her one hundredth birthday on September 18, 2014 at the University of Portland attended by over 150 relatives, friends, and neighbors.

She will be deeply missed by all.

Private Committal Service will be at Mt. Calvary Catholic Cemetery at a later date.

Contributions in Margaret’s memory may be made to Holy Cross School.

Help tell the story of Margaret by contributing to the Life Event Timeline. Upload the photo of an event...

Margaret was a great lady. She always had a quick smile and a warm welcome. She will be missed.