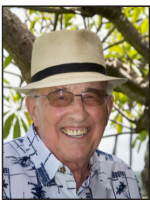 As written from the Oregon Jewish Museum;

We are truly saddened to announce the death of Leslie Aigner, a beloved member of our community from the museum’s very beginning. Born in Czechoslovakia the same year as Anne Frank, Leslie survived years in a slave labor camp, the Budapest Ghetto, and the death camps of Auschwitz and Dachau.

Leslie was liberated in Dachau by American troops on April 29, 1945, a date he always referred to as his second birthday. After liberation, he returned to his home in Hungary to find that most of his family members had been murdered.

After marrying his beautiful wife Eva in 1956 they escaped from Communist Hungary. They settled in Portland, and became the proud parents of Sue and Rob and were eventually blessed with grandchildren and great grandchildren.

Leslie and Eva began sharing their stories when local Holocaust deniers became vocal in the late 1980s. As members of the Holocaust Speaker’s Bureau, they spoke to thousands of students and adults across the Pacific Northwest. One of Leslie’s proudest moments came with the creation of the Oregon Holocaust Memorial, dedicated in Washington Park in 2004.

We have lost a dear friend who was also a model of valor and a paragon of dignity. Les never complained, always greeted us with a smile, and, to the very end, embodied for us the deepest meanings of the word “survivor.” May his memory endure as a blessing.

Help tell the story of Leslie by contributing to the Life Event Timeline. Upload the photo of an event...

To the Aigner family. My name is Steve Doell. I did not know Les. I was reading his obituary last night. It is just above my dad’s on the Holman Funeral Service website. It appears Dad was one of his liberators at Dachau. What a coincidence. Or is it synchronicity? May God bless Les and may he rest in peace. Take care of yourselves now.