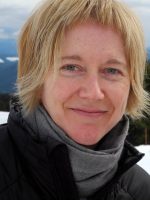 Kristin Ann Venderbush, aged 54, passed away at her home in Portland, OR, on Tuesday, September 6, 2022, after a 14-month battle with ALS, which she fought with dignity and grace.

Kristin was born in Appleton, WI, the youngest of three siblings. In 1969, the family moved to Grand Rapids, MI, where Kristin spent her formative years. After the death of her father in 1975, the family returned to Wisconsin, residing in Mequon. There, Kristin attended public school from the sixth grade until her graduation from Homestead High School in 1985. She went on to study at University of Wisconsin-Milwaukee, where she completed a Bachelor’s Degree in Comparative Literature in 1990. Interspersed with travels, adventures, and discoveries, Kristin continued her education, earning a Master’s Degree in Psychology (with an emphasis on Contemplative Psychotherapy) from Naropa University in Colorado in 1998. In 2015, at the age of 47, she earned a second Master’s Degree, this one in Advanced Practice Psychiatric Nursing, from Oregon Health and Science University in Portland.

Kristin was a  Psychiatric Nurse Practitioner with gifted insight, communication, and dedication. She worked in a private practice (Portland Psychiatric Alliance) that she opened in 2020 with her dear friend and fellow practitioner, Tyler Chipman. Prior to that, she was a practitioner for five years at Women’s Healthcare Associates, in Portland. Her career also included positions as Administrative Director and Admissions Manager for De Paul Treatment Centers, Mental Health Case Manager for Standard Insurance Company, and Administrative Director for the Psychology Department of Naropa Institute.

Kristin was preceded in death by her father, Dr. Kenneth R. Venderbush, and her stepfather, Ronald E. Bishop. She is survived by her mother, Lorna Bishop, of Cornelius, NC; her brother, David (Joanna) Venderbush, of New York, NY; her sister, Jennifer Lyons, of Belgium, WI; nieces Erin Cain, Carolyn Lyons, and Nan Venderbush; nephews Shannon Cain, Zachary (Julia) Lyons, and Sweyn and Winston Venderbush; countless dear friends and members of her recovery community; and her beloved cats, Walter and Ike.

In lieu of flowers, donations in Kristin’s name can be made to: ALS Association-Oregon Chapter: http://www.alsa-or.org

Online condolences can be made at: https://www.holmansfuneralservice.com

“Find the place where your soul is sparkling and follow it.”  -KV

Help tell the story of Kristin by contributing to the Life Event Timeline. Upload the photo of an event...

Kristin helped me and showed me kindness during a critical period of my life. I grew to love her and am heart broken to have heard of her passing. Sending her love here and to the great beyond, wherever that may be.

What a wonderful human being. I only knew her on the periphery and a few close encounters, but her spirit, oh that’s spirit that was just so gentle around you. I always felt safe and valued. Thank you for the kind words that were always enough to head me in the right direction. Rest in love and peace

I am so sorry to hear of Kristin's passing. My thoughts go out to her family and friends. Kristin and I were friends in middle school and high school and I have so many great memories of those times. We went to many concerts together, Badger games, took ballet, went to the pool, and listened to music on Kristin's awesome stereo. Kristin was so creative and always up for adventures. I will miss her and cherish the memories I have.