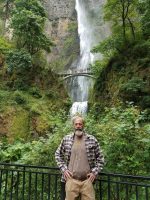 Kirk Lloyd Cromwell passed away on November 7, 2020 from Cancer. He was a native of Rodeo, California and made his home in Portland, Oregon. Kirk earned his first-degree black belt in Kenpo Karate at the age of 16, which made him the youngest black belt in California at that time. He received his second-degree black belt in 1987. He worked for many years at C&H Sugar as the melt house head operator, where he enjoyed having fun with his co-workers.  In addition to his love of Karate and sugar production, he was also an excellent outdoorsman, feeling most comfortable in the forests and lake areas of the Pacific Northwest. He loved all animals, especially dogs, and owned several exotic pets over his lifetime, including a boa constrictor, a red-tailed hawk, and a raccoon. Kirk was extremely affable, having had many friends and lovers over the years, all of whom will cherish his memory. He is survived by his sisters, Sharyn and Patty; his daughters, Alisha Marie, Ebony, and Alisha Kay; his sons, Nicholas and Kirk, Jr; and his grandchildren, Diego, Carmella, Tierra, Jordan, Stella, Lilith, and Pharrah.

Help tell the story of Kirk by contributing to the Life Event Timeline. Upload the photo of an event...

I miss you Dad, I miss seeing your smile everyday.

I love you Dad. I’m glad I got to be the one to be by your side until the very end. This isn’t Goodbye just I’ll see you later.

to my only Brother, who only gave me good memories (Frog)

Your dad has always been proud of you.. I'm sorry for your loss...

I love you dad!

My condolences to Alicia and all of the family!