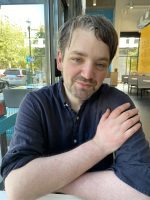 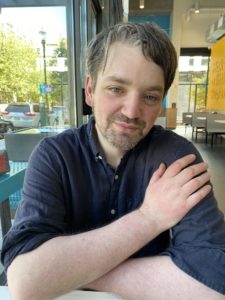 Kevin Noah Howerton was born February 15, 1984 in Pensacola, Florida, and passed away over Labor Day weekend, September 5, 2021 at age 37. While his legal name was Kevin, everyone (except his family), knew him as Noah. Noah was good natured and never once complained that his family and childhood friends continued to call him Kevin.

As a child, Noah lived in Pensacola, San Diego, Mililani, HI, back to San Diego, and on to River Vale, NJ where he graduated from Pascack Valley high school. He attended Arizona State University for one year, continued his education at Santa Barbara City Community College, and graduated with a degree in Psychology from Humboldt State University. Following college, he pursued work in computer science. In spite of his Psychology degree, his real talents lay in coding, and he was fluent in several computer languages but most interested in Python. Over the years, he lived and worked in Brooklyn and San Francisco, settling in Portland, Oregon. He missed New York for its diversity and vitality, and dreamed of returning one day.

Noah is remembered by his family for the flash of his dimples and the mischievous sparkle in his eyes when he smiled. His humor was quick, insightful, and incisive. He was intelligent, off-beat, empathetic, and reflective. He was kind, loving, and giving. Following a snowboarding accident in his teens, he struggled greatly with chronic pain and the accompanying mental health issues. In spite of this, he lived his life with dignity and participated as fully as he could. While untraditional in his expression, his Jewish identity and heritage were important to him. He cared deeply about family, and made sure he stayed connected to those he loved. Not all of his relationships were easy, and he expressed his love in those cases by holding mementos and pictures as reminders of easier times. 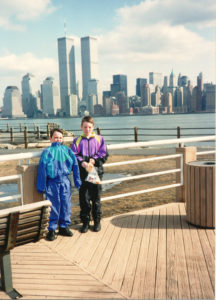 Noah was a technology hobbyist from his earliest days, and loved to take things apart (sometimes breaking them on purpose to do so); he was mostly successful at putting them back together. He always had multiple projects going, and dabbled in cryptocurrency algorithmic trading and hardware, rebuilding computers, and app development. He loved quirky art and was a gifted photographer himself. He loved music and had deep knowledge of popular music history since the 50’s, able to name every cover of a favorite song and what influences were important to his favorite musicians. He especially loved the ocean and at times, successfully managed salt water aquaria. His clown fish and anemone had babies. When visiting tidepools or an aquarium, his knowledge of ocean life was informative to whoever he was with. Being near the ocean was an important part of his life in California and New York, and he found beauty and peace in all of nature. In August of 21, he spent a joyful long weekend with his mom, Cathy, and first cousin once removed, Meite, in Newport on the Oregon Coast, visiting the things he loved and enjoying the ocean view, breeze, and food. He was a great cook, and overall, a healthy eater. However, his legendary sweet tooth and taste for disgustingly sugary food provided much amusement to his family. During the August vacation, he was observed eating a Cinnabon stuffed cookie with double extra frosting for dip… 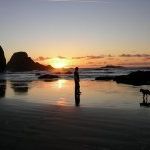 Noah is survived by his mother, Dr. Cathy Newman Thomas, his step-father, Joseph Walter Thomas, and his older brother, Jacob Kent Howerton. In 2013, when Jake was diagnosed with Acute Myeloid Leukemia (M6), Noah was a perfect match to donate bone marrow, and Jake continues to be healthy and cancer free today. Noah is also survived by Kaitlin Funabashi, Jake’s loving partner, and their three beautiful children, Louis Ray, Maribel Tana, and Nino Jones. He is survived by his wonderful first cousins once removed and their families, Mark Moser (Nathan and Eliot) and Sheila Kercheff; Cathy Moser and Jeff Itzkow (Benji and Eleni, Jono, and Frannie); and Meite Moser and Chris Bottrill (Samantha and Gabriel).  Noah is survived by his paternal grandmother, Fay Binder Howerton, his father, Dean Raymond Howerton, Dean’s wife, Sally, and Noah’s sister, Andrea.

While Noah is gone too soon, he lived his life, with all of its challenges, to the fullest extent possible. He is deeply mourned and missed by those who loved him. A quote from Shakespeare, Julius Caesar, may say it best:

His life was gentle and the elements so mixed in him that nature might stand up and say to all the world – This was a man.

May his memory be a blessing.

Help tell the story of Kevin by contributing to the Life Event Timeline. Upload the photo of an event...

I just remember Kevin's round little face and smile. It was so long ago I only see him as a little boy. I hope and pray you and your family are comforted. You have always meant so much to me.

Cathy I pray that you are comforted. My love and prayers are with you and the family.

May God's blessings be with your family dur Prayers and sincere condolences to the family.

In reading this most beautiful, heartfelt and loving tribute to Kevin, I am moved by the richness of the experiences of him by those who knew him best, and by his legacy of love in having donated bone marrow to his brother, Jake. I will never forget, Cathy, the day you discovered that Kevin was a match for Jake. Were it not for his selfless, lifesaving gift, there might not be the three beautiful children who have added so much love and happiness to your extraordinary family. May Kevin Rest In Peace, and may you and all his loved ones find comfort and peace in memories and fellowship.

Heartbroken to hear of the passing of this terrific young man with the infectious smile. Our memories or Kevin are all fun - Halloween humor as a River Vale teen, snowboarding/ski trips to Lake Tahoe and Vermont (where, always unique, he opted for lasagna over pancakes with real maple syrup for breakfast), backyard BBQs and many more. Although we have not had the pleasure of seeing him for many years, but will fondly remember all the times we enjoyed with him and his wonderful family. God Bless him in his eternal rest, and God Bless his family who have to deal with this great loss.

I met Kevin when he was a colicky infant - but when he stopped crying, his gorgeous eyes, his smile and his cute cowlick made you forget that he ever cried! I had the opportunity to meet up with Kevin a number of times over the years. There was no crying when we got together - only smiles, laughs and his urge to share his favourite. eateries. Kevin was generous with whatever he had - and the courage that he mustered to get on a plane and donate stem cells was astounding! He showed me courage that I rarely get to see. When I get into a hard spot and have to muster up courage, he is one of my sources of strength.