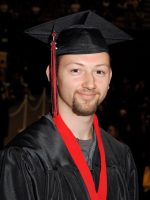 When Joshua was born in Washington State on June 19, 1993, the world had no idea what a special soul would walk this earth or the gifts he would freely give.

Joshua was just 4 years old when his family moved to the Portland, Oregon area in 1997. The little ball of energy, with long, golden brown curls, intense curiosity, and a heartwarming smile helped build the family home, or so he thought. He would carry nails, hammers and lumber but when no one was watching Joshua would become captivated by something mechanical and and right then would decide all work must cease so he could figure out how it operated.

Since birth his family sensed something was special with Joshua and spent years in search of a diagnosis. In the year 2000, Joshua was diagnosed with High Functions Asperger’s Syndrome. There was finally an answer for the endless curiosity, collections, and all things known about anacondas.

As a child Joshua loved Legos, puzzles, mechanics, and challenges of any kind (Not too hot for me!)  He took great delight when a parent would call him in to put together something they couldn’t quite manage. Joshua had it assembled in a flash.

As he grew, he studied violin, taught himself to play the guitar, and was also a singer/song writer. He played by ear. In 2012 Joshua produced and published an album of his original music. Musically gifted doesn’t come close to describing Joshua’s ability with his greatest form of therapy. Joshua graduated from Clackamas High School in 2011 and went on to earn a degree in culinary arts.

Joshua never met a stranger and took genuine joy in making others smile. Time after time he put others needs above his own. He had a quick wit, infectious laugh, and sparkling eyes that hinted of mischief and fun.

Around the age of 19 Joshua felt he was called as a soldier of God to the battleground of downtown Portland to spread light, joy, and laughter to the ones that needed it most. It was there he developed strong relationships, shared his faith, influenced many to leave the streets, and always made those around him feel special. His Creator called him home October 7, 2021.

Joshua is survived by his parents Jeff and Teri, his sister Ariana, and brother Michael, as well as a niece and several nephews.

Although greatly missed by his family and friends, Joshua’s bright light was never dimmed, it was just called for another mission.

Help tell the story of Joshua by contributing to the Life Event Timeline. Upload the photo of an event...

I am so sorry for your loss, hugs and prayers for your family.

Joshua I had the pleasure of meeting you, you showed me the Fire pit you helped build for your Mom.... I know that when the Flame burns in that pit, will only bring great joy, and great Family Memories!! Rest in peace, you will be Missed..... But Never Forgotten. 🙏❤

Thinking of you as you spread your wings to fly. You will be greatly missed by many. Fly high now Angel.

I will hold in my heart the memory of Joshua. He was always so kind and polite. He seemed to deeply care for the people he surrounded himself with. We will not forget him. I hope the beautiful memories of his life bring you healing and peace.

I will always remember Joshua's gentle spirit and polite, kind manner. I wish love and healing for his family. Please know that he mattered to us!

I never met Joshua in person. Through his mother Teri! Over the years I've come to know and love this very special young man. RIP Joshua . I asked my sister Joyce to welcome you with open arms

Joshua, I love you so much. You looked peaceful and rested. Thank you for being a bright light in the darkness, for loving with all of your heart, and always making me smile. Your memory will live on. I love you so my baby boy.