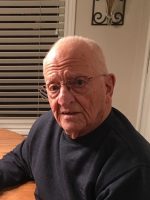 He was a devoted husband, father, grandfather, and great-grandfather.  A parishioner at St. Henry’s parish and proud of his Catholic faith and Italian heritage. He enjoyed cooking, golf, watching the Pittsburgh Steelers and tending to his abundant garden.

May he rest in peace.

If desired, donation can be made to The Franciscan Sisters of the Eucharist in Bridal Veil, OR.

Help tell the story of Joseph by contributing to the Life Event Timeline. Upload the photo of an event...

Be the first to share a memory of Joseph .