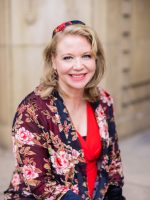 Jennifer Barnum Luria – Jennie to her loved ones – died suddenly of a heart attack Thursday, June 24, during her valiant fight against cancer.

Born in Bellevue, WA, Jennie moved with her parents to the Bay area before settling in southern California. After many adventures foreign and domestic, she arrived in Portland in 2017.

A graduate of UCLA, Columbia Business School, and Columbia University’s School of International and Public Affairs, Jennie was as accomplished as she was kind and charismatic.

Known for her generosity, thoughtfulness and quick wit, Jennie never let a little thing like cancer get in the way of living her life. If anything, a brain tumor only enhanced her irreverent sense of humor and boundless joie de vivre. She loved travel, reading, crafting with anything sparkly, the color pink, and carbohydrates. Her greatest loves by far, though, were her husband of 20 years, Gil, and their two teenaged boys, Ben and Adam.

If wealth could be measured in the number of friends, admirers and well-wishers who flocked to Jennie, both in her heyday and in her time of need, she was the richest among us.

Services were held at Beth Israel Cemetery on June 27. In lieu of flowers, donations may be made to Blanchet House in Jennie’s memory.

Help tell the story of Jennie by contributing to the Life Event Timeline. Upload the photo of an event...

Be the first to share a memory of Jennie .