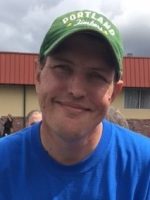 Jason E. Hutchcroft, 46, died unexpectedly at his home on December 31, 2021.  Jason was born in Ashland, OR on August 21, 1975.  He worked as a clerk for more than 20 years.  Jason was an AVID sports fan following his favorite teams, the Portland Trailblazers, Seattle Seahawks, Mariners, and Portland Timbers.  Jason had a passion and love for music that resulted in him attending many concerts every year.  Two of his favorite bands were Atmosphere and Nothing Nowhere.  He loved to play family games like Scrabble and Rummy.   Jason was a loving son, brother, father, nephew, uncle, and friend.  He was kind to everyone especially strangers.  His favorite holiday was Christmas.

Jason is survived by his daughter Mystery Matusch-Hutchcroft; mother Kaleen Stepnioski and stepfather John; father Ron Hutchcroft; stepsister Brittany Stepnioski; brother-in-law Tyler, and longtime friend Misty Matusch.  Many aunts and uncles and one niece, Sadie.  He was preceded in death by his grandparents.

Jason will be deeply missed, but his memory will live on in the hearts of those who knew and loved him.

Reception to follow at McMenamin’s Kennedy School, in the Jordan Room.

Help tell the story of Jason by contributing to the Life Event Timeline. Upload the photo of an event...

I met Jason at a picnic with his family. He and I hit it off and talked for along time. His kindness was always present. You are with Jesus now and we will all meet again.