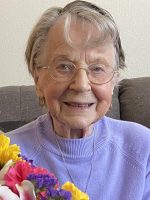 February 19, 1927 - December 26, 2022
Janet C. Stigberg, 95, of Portland, Oregon, passed away on December 26, 2022 after a brief illness. Janet was born in New Haven, Connecticut on February 19, 1927, where she lived for many years before moving to Cheshire, Connecticut. She attended UCONN and worked as a private secretary, and performed for several years with her brother as a professional ballroom dancer. She was an avid reader and a passionate fan of the UCONN women’s basketball team. She was predeceased by her husband Bertel Stigberg. She is survived by her three daughters, Leslie (Wells) Neal, Jan (Richard Winter) Stigberg, and Kathleen Stigberg; one son, Robert Stigberg; 7 grandchildren and 2 great-grandchildren. She will be remembered by her many friends as a kind and caring person. Private services will be held at the convenience of the family. In lieu of flowers, memorial donations may be made to Catholic Charities or another charity of
your choice.
Print

Help tell the story of Janet by contributing to the Life Event Timeline. Upload the photo of an event...

I was sorry to read of Janet's passing. She was a lovely, caring and kind person. There is never enough time with loved ones. I am sure she will be greatly missed.

Oh Janet, I will miss you so. You were always there for me when times were tough. You had so many great, long enduring friendships. That says so much about you. How special am I to have had you in my life.

Goodbye my friend. I will miss you and our hourly chats. We talked about everything and laughed all the time. I was thinking today about the time you were taking (and treating) Fran and I out to lunch. I said, "I'll drive." Oh, no!" you said. "I insist upon driving - it's my treat to you girls." I thought to myself, "I'm not too sure that is a good idea. Jan is 90! She shouldn't drive us that far. She might be distracted by us chatting in the car." BUT drive you did, and we had a wonderful lunch. I told you later that you drove better than Fran or Janet Brown." And you did! We laughed together. We had so many fun times together (remember the time we had coffee at Fran's and JoAnn talked constantly? You said, "Never again!" I'm thinking of you today and I do miss you; but as you said, "It's time." Keep an eye on your loved ones and look in on me once in a while. Love, Kathy "

Thinking of you and sending hugs.💜❤️💜