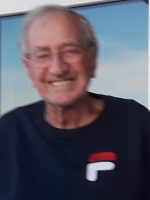 On Sunday, Feb. 7, 2021, Herbert Southwell Perrin died at Providence Hospital with his wife Judy at his side. He was 90 years old and was a resident of Portland, Ore.

Herb was born in Seaside, Ore., to Herbert R. Perrin and Agnes (Southwell) Perrin and grew up on the family dairy farm with his three older siblings.

He was employed by Schetky Equipment Co. and later Schetky NW Sales for about 35 years. He enjoyed selling refuse and recycling equipment and particularly enjoyed his customers, many of whom became friends.

Herb and Judy were together for almost 42 years and had just celebrated their 35th wedding anniversary on New Years Eve.

Herb was preceded in death by his parents; and his siblings, Virginia Tierney, Donald Perrin and Robert Perrin. He is survived by his wife, Judy; his daughters, Kali Naone, Koni Greatwood, Kari Geoghegan, Kathryn Simantel and their families; and numerous wonderful nieces and nephews.

Herb was cremated and at a future date will be interred in Willamette National Cemetery.

Help tell the story of Herbert Southwell by contributing to the Life Event Timeline. Upload the photo of an event...

Be the first to share a memory of Herbert Southwell.