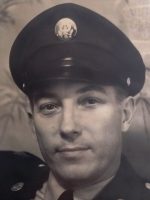 He was born in South Dakota and raised in the town of Freeman. He graduated from Freeman High School. His grandparents were German immigrants from Russia known as Volga-Deutsch. They were among the first settlers in the area. They cut sod bricks from prairie grass to build their first homes. His father, Herbert L. Hofer Sr. was an early submariner and subsequently joined the army and passed away at the rank of Master Sergeant. His mother, Anna Marie (Schenk) Hofer was a Registered Nurse and graduated from Sacred Heart Nursing School in Yankton, South Dakota.

He retired from the US Army as a CW04 (Senior Chief Warrant Officer). He entered the military as a teenager between WWII and Korean wars and rose rapidly to the rank of First Sergeant. He held that rank til his late 30’s when he was promoted to Warrant Officer achieving the highest rank in the Warrant class possible at the time. He retired at the time of Desert Storm to care for his aged mother. He had a military career in excess of 40 years, spanning Korea, Viet Nam, The Balkans and Desert Storm.

He is survived by his four children from his marriage to Julia Staysity. They are Herbert Lloyd Hofer III, Christine Ann (Hofer) Schoen, Judy Lynn (Hofer) Searls and Forest James Hofer.

He is widowed from his wife Toshiko who passed away on October 10, 2016.

Prior to Toshi he had been married 4 times. First to Julia Staysity then Janet Gibbs Errington and twice to Barbara Taylor Hagebusch. He is also survived by his 3 stepchildren from his marriages to Barbara. Herbert, Jon and Aralynn Hagebusch.

He will be interred at Vancouver Post Cemetery with military honors.

He enjoyed hunting, fishing, playing cards and singing out loud whenever and wherever he felt like.

Help tell the story of Herbert by contributing to the Life Event Timeline. Upload the photo of an event...

Lloyd was always kind to me during my marriage to Forest, always glad to see me.