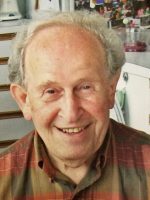 Gerald Cogan, a long-time resident of Portland, passed away on September 10, 2021, about one month shy of his 92nd birthday.

Gerald Lee Cogan was born on October 7, 1929, the third of six children of Anne and David Cogan of Bath, Maine. The family belonged to Beth Israel Congregation where Gerald became Bar Mitzvah. Gerald graduated from Morse High School in 1946 and then attended Bowdoin College in Brunswick, Maine for two years, and continued his studies at the University of Portland after the whole family moved to Portland, Oregon in 1948. He went on to pursue a career in dentistry, receiving his DMD from OHSU School of Dentistry in 1953. He married Zadell Joy Myerson in 1952. In 1953, he joined the army and served as an army dentist in Texas and Maryland.

After his army service, Gerald returned to Portland and started a dental practice with Dr. Duane Paulson. Dr. Eugene Skourtes later joined the practice. In 1970, the three dentists founded Willamette Dental Group. Gerald was a pioneer in creating dental plans that emphasized preventive care, which was a departure from the traditional fee-for-service model of care. The first free-standing Willamette Dental clinic was built on Jefferson Street in Portland and opened in 1976. The practice expanded to the large clinic system it is today, with over 50 clinics in multiple states.

Gerald was part of a large extended family on both east and west coasts, and together with Zadell raised four children in their house in northwest Portland: Laurie Cogan, Deborah Cogan, Marjorie Cogan, and Daniel Cogan. He has two grandchildren, Cory Hoffman and Emma Cogan.

Gerald is also survived by his brother Arnold and his sisters Carol and Judy.

He contributed to the community in numerous other ways. He was a leader in the successful campaign to fluoridate the water in Portland to reduce tooth decay.  He practiced pro bono dentistry in low-income communities. He was active in the Portland City Club. He served as president of his synagogue, Congregation Neveh Shalom, for two years. He was an early opponent of the Vietnam War and participated in several protests.

Gerald had a great appreciation of the English language. He enjoyed writing and tried his hand at writing plays and screenplays, sending some of them in to Hollywood. In recent years, his pet project was his writing a book exploring the special significance of the Preamble to the United States Constitution. In earlier years, he acted in several plays in local Portland theater venues. He also proudly competed in the State of Oregon Senior Spelling Bee and won first place in 2000.

He also loved Oregon’s great outdoors and often took his children on hikes in nearby Macleay Park and parks in the greater Portland area such as Eagle Creek, as well as cross-country skiing on Mt Hood. He spent vacations with his family at Rockaway Beach and at Crescent Lake, Oregon, and always looked forward to the many fly-fishing trips he took over the years.

As a sports fan, Gerald enjoyed taking his children to many sporting events to see the Portland Beavers, Buckaroos, and Trailblazers. He was a lover of opera, Broadway musicals, and comedy.

Among his other hobbies was the making of many home movies. Some of the best remembered were trick movies with home-grown special effects.

Gerald also loved blueberries and made it his project to become skilled at baking anything and everything with blueberries—muffins, pies, and more.

In lieu of flowers, donations in his honor may be made to ACLU Foundation of Oregon, https://action.aclu.org/give/support-aclu-oregon, or Emily’s List, https://win.emilyslist.org/a/donate-to-emily.

A graveside service will be held on Monday, September 13, 2021 at 10:00 AM at Ahavai Shalom Cemetery

Help tell the story of Gerald by contributing to the Life Event Timeline. Upload the photo of an event...

Dr. Cogan was my first dentist when I moved to Portland in 1971. He was not only an outstanding dentist but a wonderful and kind human being. His memory is indeed a blessing.

It was a blessing and joy to work with Gerry when he created Willamette Dental Group, and when I was with Cascade Health Care. He was a real leader and innovator. Also, he took good care of my teeth for many years, and I enjoyed his wonderful sense of humor. May God rest his soul.

We and Gerald and Zadell were married four days apart in 1952 and our first children, Laurie and Mark, were born a day apart in 1956. He was a special brother, brother in law and uncle to all our children and we have many fond family memories.

Dr. Cogan, This makes me very sad! You will be very missed. I really enjoyed working with you for so many years. Rest now & be at peace.

Dr Gerald Cogan was a tireless and passionate advocate for protecting our constitutional rights and freedoms. He was a steadfast supporter of the ACLU and the Democratic Party. Please re-read the Preamble to the US Constitution. He was devoted to the ideals of our country, and was writing a book based on the Preamble. He was a man who took to heart the admonition of the prophet to love justice and mercy and walk humbly with the Eternal. He will be missed.

Such a kind man. Enjoyed working with you Dr. Cogan. Condolences to the Cogan family.

Wonderful man; fond remembrances; an honor to know you.

Daniel & Lisa - you’re in my prayers. I’m sorry for your loss and offer my sincere condolences for comfort during this time of loss. I admired him greatly.

Oh, this makes me sad. 🥲 Such a sweet man. RIP Dr Cogan…My condolences to the Cogan family.

Enjoyed working with you so many years

So sad to hear, המקום ינחם אתכם. (Hamakon yenachem etchem). Condolences to all the extended family; to Uncle Gerald's siblings, his children and his grandchildren.