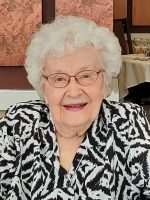 Elaine H. Bauer was born to Phillip and Marie Wons on October 8, 1922 in
Chicago, Illinois.  She passed away peacefully at Miramont Pointe in Clackamas, Oregon at age 99 on October 14, 2021.

Elaine grew up in Chicago with her parents and three brothers, Harry, Clare, and Irvin.  She graduated from Oak Park and River Forest Township High School.  She then joined the US Navy WAVES where she was a Yeoman stationed in Farragut, Idaho from 1944-1945.  It was in the Navy that she met her future husband, Henry (Hank) Bauer.  They were married in Chicago on August 11, 1945 and then moved to Portland, Oregon where Hank lived.  They had one child, Nancy Kathleen.

Elaine was a secretary during her working life and retired from her position as secretary to the Chief Engineer at Bonneville Power Administration.  Hank also retired from the Bonneville Power Administration as a management analyst and records officer.  Elaine enjoyed spending time with her grandchildren and had many interests including photography, tole painting, stichery, and collecting teddy bears and tea pots.  She was known for her unique “Pin Prints,” which she designed on watercolor paper.  Many of them featured hearts and quilts.  Later in life, she enjoyed playing poker and doing jigsaw puzzles.  Elaine was a lifelong member of the Catholic Church and last of Christ the King Catholic Church in Milwaukie.

Elaine valued her family above all, which she showed through her concern, generosity, and kindness.  She was a wonderful mother, grandmother, and great-grandmother.  She never wanted to be in the spotlight, but was always thinking of others.  She will be greatly missed and will always be in our hearts.

Elaine is survived by her only child, Nancy Hendricks, and her husband Greg Hendricks, of Milwaukie; two grandchildren, Lyle Hendricks (wife Heather) of Portland and Liza Ketcham of Oregon City; and three great-grandchildren, Taylor Hendricks, child of Liza, and Madeline Hendricks and Arraya Craig, children of Lyle and Heather.  Elaine was pre-deceased by her parents, brothers, and husband Hank, who passed away in 2006.

A private Catholic committal service will be held at Willamette National Cemetery on October 28, 2021, where Elaine will be interred with Hank.

Contributions in Elaine’s memory can be made to Brighton Hospice, a veterans’ organization, or the charity of your choice.

Help tell the story of Elaine by contributing to the Life Event Timeline. Upload the photo of an event...

Be the first to share a memory of Elaine .