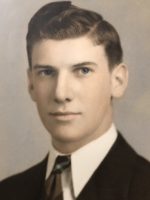 Edward John Doell, husband, father, and grandfather died peacefully at home surrounded by his three children and friends on August 22, 2021.

It is with a mixture of love, gratitude, memories and sadness that his family and friends say goodbye.

He lived a long and adventurous life. 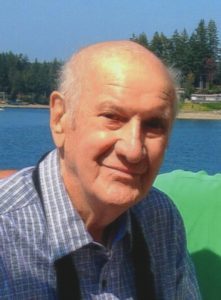 Edward John Doell was born December 10, 1922 in Wetonka, South Dakota to John and Anna Doell. He was the youngest of four children and the only boy in the family. His parents moved the family to a farm in Minnesota, just north of Detroit Lakes in 1926.

He was a child of the Great Depression attending a one room grade school through the eighth grade. It was very difficult financially for his family and his work on the family farm was important to their survival. He did not attend high school, but learned the value of hard work and the dollar at an early age.

Hopping on a freight train with a friend, he came to Portland in January 1942. He followed one of his older sisters, Helen, and worked in the shipyards. He enlisted in the United States Army in April 1942, four months after Pearl Harbor. He received basic training at Camp Swift, Texas and advanced training in the Signal Corps (communications) at Camp Crowder and Fort Polk, Louisiana.

He was deployed to Tunisia, North Africa in February of 1943. In July 1943 he was sent to Sicily where he served until October of 1943. After Sicily, he was stationed in England for seven months where he trained for the invasion of the European continent.

Edward landed on Utah Beach, D-Day plus one with General Hodges, the First Army and the 302nd Signal Corps Battalion. He served as communications liaison between the First Army Headquarters, Fourth Armored Division and Eighty-Second and One Hundred First Airborne Divisions. In mid-July of 1944 the 302nd Signal Corps Battalion was pulled back to England after the Battle of Saint-Lo. Within a week of returning to England he was re-deployed to France with General Patton’s Third Army Headquarters. He was assigned to the Third Army Headquarters for the remainder of the war. He served in Patton’s “breakout” from Normandy, “sweep” of the Brest Peninsula and the march across France to the battle in Alsace-Lorraine where the Third Army was mired down in October – November 1944, until Metz fell to the Americans in late November.

The Third Army was billeted at Metz-Nancy, France in November – December of 1944.
In December 1944 – January 1945 Ed Doell served in the operation that became known as the Battle of the Bulge.

In late March of 1945 he entered Germany with the Third Army. Ed was a second day liberator at Dachau. He was stationed in Heidelberg until he returned to the United States in December 1945. He received an honorable discharge from the Army as a Staff Sergeant at Fort Lewis, Washington.

Ed married Margaret Mary Lash in Portland, Oregon in 1948. They made their home in Portland where they raised three children, Steve, Barbara and Debora. They have two grandchildren, Scott and Lisa Doell.

Ed enjoyed a successful career in the automotive aftermarket business which he retired from in 1986. He started with the George Lawrence Company in Portland, Oregon. He then went to work for American Hammered Division of Koppers Inc. which was later acquired by the Sealed Power Corporation, Muskegon, Michigan. He worked for Sealed Power for thirty-eight years and rose to the position of Western Regional Sales Manager with responsibilities for managing thirteen District Sales Managers and sales in nine western states and British Columbia.

When Ed retired his hobby was a little farm in Battleground, Washington where he went every day to tend to his horses which he loved. He also enjoyed gardening. He loved his roses and he liked to dispense advice and help neighbors with their gardens.

Ed loved to travel. Whether it was to Hawaii, Fiji, Mexico, Europe, Canada, Alaska, or anywhere in the lower 48 states. He definitely had the wanderlust. He particularly liked the American West. In listening to him talk over the years he would have been perfectly happy being born in 1850 and living in the old Wild West of the late 1800’s. Ed didn’t watch much television, however he rarely missed an episode of Bonanza or Gunsmoke. He loved to fish and hunt with his three amigos, John, Dino and Doc. Ed loved people and telling stories.
He never met a stranger. He loved playing cards and also cheating at cards.
Ask anyone who played against him.

In 2004, the sixtieth anniversary of D-Day, Ed Doell returned to Europe with his son Steve to see once more the places where he served as a young man. When he saw Utah Beach for the first time after all of those years had passed, he was asked by Steve what he was thinking. He replied, things seem small in everyday life, when you think about what happened here and across Europe during the year that followed D-Day.

In his later years when Ed was presented with health challenges, he outlived the life expectancies presented to him by the doctors including late adult onset diabetes at 64 years old (they said he would live for 20 years), sextuple heart bypass surgery at 72 (they said it would give him an additional 10 years), aortic valve disease at 93 (they said 2 maybe 3 years) and a broken femur at 95 years old (they said people with his health issues last 12-18 months after a fall).

He should have been wagering with these people.

He always beat their odds.

He did it with dignity, grace and strength.

Ed Doell served his country in the U.S. Army surviving the death, destruction and horror of World War II. He worked hard to support his family, enjoy his life and ultimately his retirement years with his wife, Margaret. He was preceded in death by his wife, 3 sisters, Mary, Irene and Helen and sadly by his beloved 12 year old granddaughter, Lisa.

He was a strong guy, a survivor, a good man and father. He loved his God, his family and his country.

The end of an era. Another passing of the Greatest Generation.

He will be dearly missed.

Help tell the story of Edward by contributing to the Life Event Timeline. Upload the photo of an event...

We are so thankful to have spent time with Ed, especially after Margaret passed away, when he shared stories about growing up on a farm, when the family dog saved his life at a very young age, and some of his memories of being part of the Normandy Invasion and being recruited to drive General Patton around periodically. Many of these visits were over breakfast at Elmer's or later at the house with the hospitality of his family or in front of our house, visiting with Debora and Ed on their way home from a scenic drive. We will miss you dear friend!!!

Debbie, Barbara, and Steve, It's hard to believe your dad is gone. It truly feels like the end of an era! I never knew he had served overseas in WWII. As a child it never occurred to me to ask. My memories of Ed are from childhood, when we lived directly behind the Doells on the same block in North Portland. We attended the same church, and Debbie and I were in the same class in school. My dad and Ed took turns, week by week, patiently driving us kids to school in the mornings. If I remember rightly, Ed drove a Mustang in the 60's? The memories that make me smile the most: Ed and his beloved Chihuahuas. Ed carrying puppy Mindy around in his shirt pocket. Ed racing outside at night in his bathrobe to rescue Cindy when she tangled with a raccoon (he actually grabbed the raccoon and flung it across the yard!) He really loved those dogs! Debbie, it meant so much to us that you and Ed came to my mom's funeral. If I had known in time, I would have been there at your dad's service. My condolences on your loss.

Steve, So sorry to hear about your dad. He lived one hell of a life. Our thought are with you and your family.

Uncle Ed, You will be truly missed. Even though you weren't my real uncle, that is what we all called you at Van Specialties for the many years we worked together. RIP God bless you my friend

Mr. Doell was one of our favorite patients. May he rest in peace Jean Wilson (Mrs. Dr John Wilson)

We are thinking of the Doell family and sending our sympathy and support. Edward lived a long and productive life and was blessed by his wonderful family. With love from John and Suzanne

You were a good man, Ed Doell. With all your loved ones again.RIP, Cousin. My condolences to Steve, Barbara and Deb.

From a baby boomer to one of the last of the Greatest Generation, thank you, Ed Doell. You saved our country and the world. We owe our security and prosperity to the sacrifices of your generation. Thank you.

What a great life your father lived. The appreciation I have for the great sacrifices he has made for all of us are impossible to describe. Steve, you and your family are in our thoughts and prayers.

I knew "Uncle Ed" from Van Specialities, when I would call on Greg & Lori Storm. What a grand gentleman!!! Always had a kind word to a factory rep. as he had been one many years ago. May he rest in peace--HE WILL BE MISSED.

I met ED at Perry South in the 80,s. ED turned into uncle ED. I bought a truck and had uncle ED order a hitch for me for my Ford 250 truck and in 2005 had another hitch installed on my gmc at his place of work Van Specialties. We will miss his clicking pen and joking around. God Bless You Uncle ED.

Dad, I love you and miss you so much already!