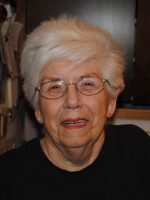 Drena McIntyre passed away in March 2021 from complications after a fall. She was 96 years old.

Drena was a native Oregonian and spent most of her life in Portland. She graduated from Girls Polytechnic High School where she learned to sew. This was a lifetime pursuit and passion. She sewed for her children and almost all of her own clothing. She became a master tailor, according to one professional who saw her work in later years.

She met Frank McIntyre, another native Oregonian, in her teen years and married him in 1944, about a week before he went overseas to serve in World War II. While he was gone she worked as an electrician in the Portland Shipyards and saved Frank’s pay to use for building a home when he returned from the Army in 1945.

The two of them literally built their house with their own hands and lived in it for the next 73 years. They raised four children there, Dan, Lorraine, Ane and Lee.

Drena was a homemaker and grew in the role. She joined a chapter of the Oregon State Home Extension in the 1960s and met monthly with her group to learn and teach each other practical skills. This group, The Early Emmys, was a meaningful part of her life for 50 years. She became a natural leader and overcame her shyness to form lifelong friendships.

Drena loved to read and passed this on to all of her kids. She also loved classical music and eventually became a season ticket holder for the Portland Opera.

Drena would have said that motherhood was her greatest accomplishment. She was proud of her kids and met the challenges of motherhood in different ways for each of her children. She drove across the US to help Dan and his wife Sue get to college. She took trips to New York to accompany Ane, who was working as a buyer for a department store. She traveled to England with Lorraine, which was a lifelong goal of hers.

And she traveled to the east coast multiple times to help Lee and his wife Josephine with care of her two grandkids, James and Louisa. Grandmotherhood was her greatest joy in later life.

Frank passed away in 2018 after a brief, severe illness. They were married for almost 75 years. Her brother, Vernon, predeceased her at age 36. Survivors include her children, Dan McIntyre (Susan McIntyre) Lorraine McIntyre, Ane McIntyre and Lee McIntyre (Josephine Hernandez). Grandchildren, Louisa McIntyre and James McIntyre. And her nephew and nieces, Cory, Christy and Melissa.

We wish to thank the staff at Pacifica Senior Living and Providence Elderplace for keeping Drena safe through the pandemic and helping her feel at home for the past 3.5 years.

A celebration of life is planned at Holman’s Funeral Home in late August. Contact family for details.

Help tell the story of Drena by contributing to the Life Event Timeline. Upload the photo of an event...

Out of all the mommas in the whole wide world I got the very best one.