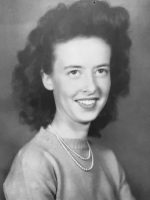 Dorris Lucille O’Neal Bull was born February 25, 1923 in Webster, Iowa, to Quaker parents, Hugh Corwin and Emily Ellis O’Neal. She was the second of five children, all born within five years. Her siblings were Jean O’Neal White, Louise O’Neal White, Ellis O’Neal, and Ruth O’Neal Powell. Dorris graduated from William Penn College (now William Penn University) in 1945. There she made several close friends who formed a “round robin” of letter writing in order to stay in touch. They kept up correspondence for more than 50 years, taking turns exchanging news.

Dorris met her husband, Ivan Bull, while both attended William Penn. Ivan was drafted into the Army during his sophomore year. He entered the Army Specialized Training Program immediately after basic training. The program was discontinued and Ivan was sent to the front lines with the 99th Infantry Division. Dorris mailed many letters to Ivan during his service, offering solace during the Battle of the Bulge and the crossing of the Rhine River on the bridge at Remagen. In April of 1945, Ivan was wounded and eventually returned to the United States.

Dorris and Ivan married on September 29, 1945 in Iowa City, where Ivan finished his bachelor’s degree at the University of Iowa. They were married 67 years before Ivan’s passing on January 31, 2013.

Dorris and Ivan resided in Rock Island, Illinois for many years. They moved to Champaign-Urbana for a few years, where Ivan earned his doctorate and taught business courses as his retirement project. Dorris and Ivan wintered in Green Valley, Arizona, playing golf and enjoying cards and book clubs with friends. Eventually they moved to La Posada in Green Valley full-time. After Ivan’s passing, Dorris moved to Portland, Oregon to be nearer some of her family.

Dorris was an exceptional partner, mother, grandmother, great-grandmother, and friend. She made good friends each time she moved to a new location. She loved volunteering as a reading teacher to young children. She loved reading and engaged in several book clubs during her retirement. Within her family book club, she was often the best read of all members, usually having finished the current book under discussion at least twice.

Dorris enjoyed sewing, quilting, crocheting, and other forms of needlework. She was masterful at playing cards and was proud of her accomplishments at fishing. She never shied away from hard work and taught her children the value of saving money, working hard, and always being honest. She believed in prayer and the compassion of God. One of the highlights of her last few years was the summer of 2018, when her family gathered in Oregon to celebrate her 95th birthday. Every child, grandchild, and living great grandchildren was there to share her love and joy.

During the COVID pandemic, Dorris kept in touch with the family through zoom. She was well-informed about current events and the interests of her grandchildren and great grandchildren. She was highly organized and had an amazing memory right up until the end.

Dorris will be sorely missed by her family and friends. If you wish to remember her with a gift, please concerning giving to Central City Concern in Portland, Oregon or to your own favorite charity.

Help tell the story of Dorris by contributing to the Life Event Timeline. Upload the photo of an event...

Be the first to share a memory of Dorris .