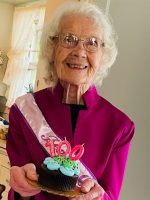 Dorothy Feriba Hansen, of Portland, born Jan. 7, 1922, in Bisbee, North Dakota to Henry and Othilde Paulsen, passed away at age 100 on December 30, 2022, in Hillsboro, Oregon after a short illness.

She married her sweetheart James A. Lytle on May 5, 1946, in Portland. Together they built a loving home where they raised three children, Deanna Marie, Robert James, and Richard David. Dorothy was widowed in May 1980 when James died unexpectedly.

On April 14, 1986, Dorothy married Gerald “Jerry” Hansen of Portland. Together they found new adventures in their retirement years including traveling and hiking around the Pacific Northwest and beyond. Dorothy loved Jerry and his family and was by his side through his illness and passing in 2003.

In 1940, she joined the Apostolic Faith Church of Portland where she went on to serve as a Sunday school music leader, choir member, gardener, and other volunteer positions of service throughout her life. She loved visiting friends and acquaintances in their homes, regularly stopping by to share a loving word, song, or prayer.

She was a true “angel on earth” who was well-loved and cared for by her family, neighbors, and church community.

Private interment will be at Willamette National Cemetery. A Celebration of Life will be held at the Apostolic Faith Church Fellowship Lodge at 10:30 a.m. on Saturday, January 14, 2023. 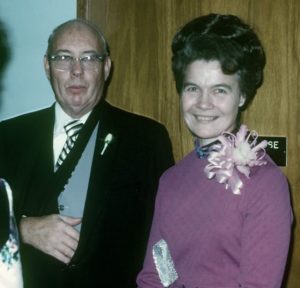 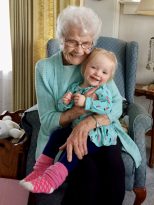 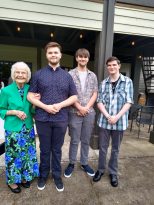 My boys and grandma

Dorothy was and is may favorite Aunt and I wish to grow up to be like her, someday. She'll guide me while she's singing with Jesus' Choir. 'God Bless You REAL GOOD,' Dorothy. Amen. Happy Birthday now as you graduate. I hug you.

Grandma was the best Grandma ever! Her life in every way was such an example for everyone. She was the kindest, most positive, ever giving, loving person I have ever known!! She will be missed.