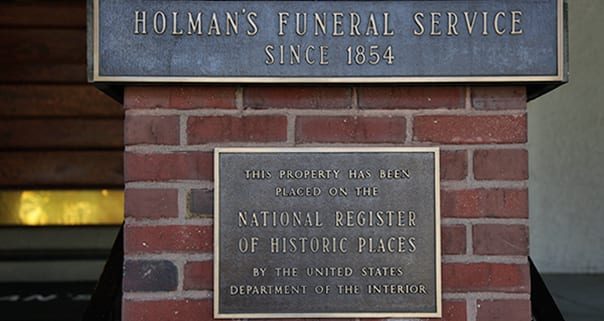 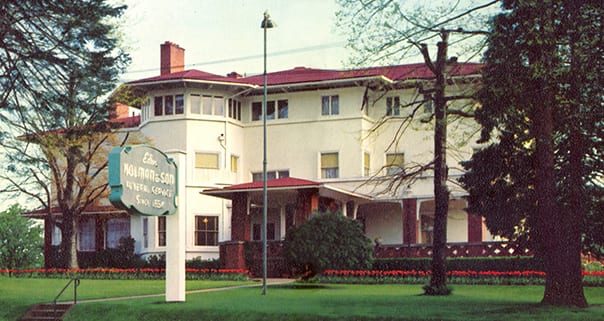 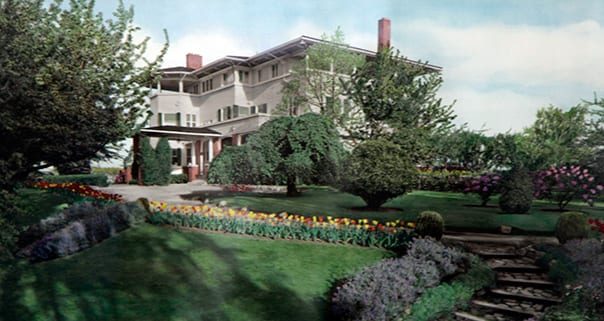 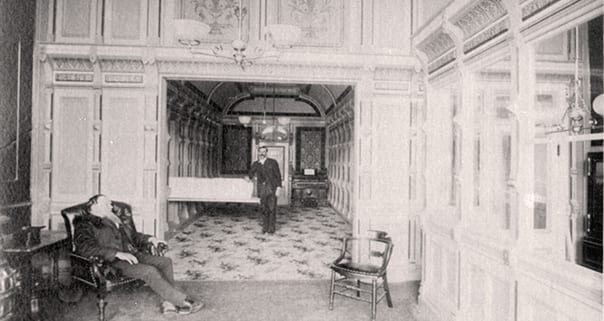 Original location of A P DeLin & Co’s Undertaker’s parlors at 151 First Street in Portland. Pictured is AP DeLin seated and his son in law, Edward Holman. 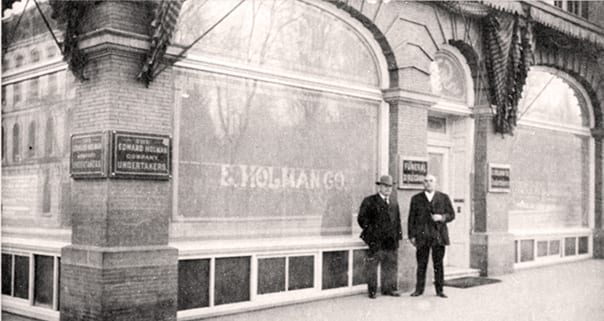 Second location of the Edward Holman Company Undertakers located at the corner of SW 3rd and Salmon Streets in Portland. Pictured is Edward Holman, on the right.

In 1854, approximately 3000 people lived in the prospering city of Portland, including Andrew P. Delin and his family. Mr. Delin was a local cabinetmaker by trade, and like many craftsmen of the era, was often called upon to make coffins. As this practice grew, Mr. Delin decided to open a funeral chapel in his business at First and Morrison Streets, and officially became A.P. Delin & Co., Undertakers. That same year, Multnomah County was chartered and Andrew P. Delin was appointed the county’s first coroner.

Mr. Delin’s son-in-law, Edward Holman, who had worked in the undertaking business with his father-in-law, eventually purchased the company and changed the name to Edward Holman & Co., Undertakers, relocating the business to larger quarters at Fourth and Yamhill Streets to accommodate the livery stables for the horse drawn hearses. Many years later, when Edward’s son Walter joined the family business, Edward Holman & Son moved once again, to their final downtown location at Third and Salmon Streets.

About that same year in 1901, a wealthy capitalist, Walter F. Burrell, was preparing to move his family into their recently constructed mansion along Portland’s eastside “Boulevard”. The 14,416 square foot home (designed by the premier architectural firm of Whidden and Lewis, who designed Portland’s City Hall and the Multnomah County Courthouse, among others), consisting of more than twenty rooms covering a full three floors as well as a full basement introduced “Prairie” style architecture to Portland. The Burrell family occupied the residence for nearly two decades until the tragic death of their son in the home prompted their sudden move.

In 1921, one year after Edward Holman died, Walter Holman, 46, succumbed to kidney disease, leaving the business to his widow, Mabel. Along with the help of their four sons, Mabel Holman took over management of the company and began to seek out a new location to accommodate the need for parking. Deciding on an eastside location, the Holman family acquired the Burrell Mansion, and moved the operation to its present location on Hawthorne Boulevard, where the building soon became known as “The House of Holman”.

In 1946, Walter and Mabel’s son, Howard Holman, became president of the company that his great grandfather started nearly 100 years prior. Mr. Holman oversaw the business for the following 40 years, until his death in 1985. Like his mother, Howard’s wife Margaret stepped in as sole owner of the business. Howard and Margaret had no children of their own, and upon her death in 2005, the business was acquired by longtime employee and general manager, Daniel Holmes.

Holman’s provides a critical service assuring bereaved families that they needn’t worry that their loved ones will be treated with the dignity and respect that they deserve.